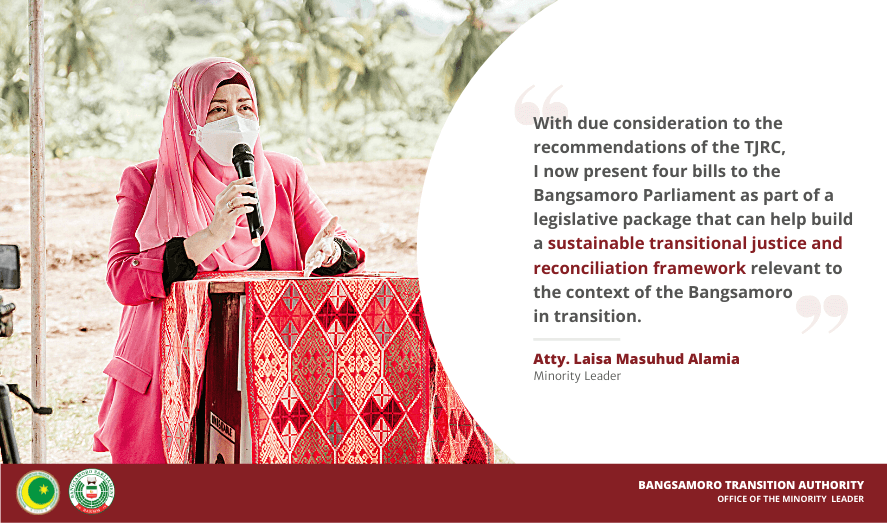 All of us who stand here as members of the parliament, both online and offline, owe this honor and privilege to the Bangsamoro revolutionaries, and their communities that sustained our peoples’ movement in defense of our right to self-determination.

But more than this privilege, we owe them our lives.

Many, if not all of us, were raised by communities of struggle. Growing up, we have lost family and friends — many of them we would have known better and grown older with, if only we had lived a life of peace and security.

But even those of us who survived were indelibly changed. I remember how the light in my mother’s eyes dimmed following the massacre, as if a part of her died together with her friends and relatives that dark day in her hometown’s history.

As we celebrate the gains we have won in the peace negotiations, it is important to acknowledge that the peace process is far from over. Our mandate as the interim government of the new Bangsamoro Autonomous Region in Muslim Mindanao (BARMM) is to facilitate a smooth transition for the region, and this transition will prove to be inadequate if we do not at least legislate transitional justice and reconciliation measures.

Transitional justice requires adopting a perspective that extends beyond the present. We must simultaneously look towards our past and our future, and facilitate both judicial and nonjudicial measures addressing human rights violations committed in the past with the intention of preventing future ones. In the same breath, we must also remain vigilant as we resist the still existing structures of violence and conflict, and systems of oppression and marginalization that have long fueled the inequalities and injustices our people endured. If gender norms, harmful stereotypes, and class hierarchies contribute to an environment conducive to conflict, it is imperative that we challenge them in our approach to transitional justice.

Transitional justice must uphold four principles — the people’s right to know, right to justice, right to reparations and the guarantee of non-recurrence. Together, these constitute the core of our transitional justice system — one that acknowledges the individual rights of the victims and their families; our collective right as a society; and our own obligation as government representatives to ensure that these rights are upheld and protected at every juncture.

We are grateful to benefit from the work of the Transitional Justice and Reconciliation Commission (TJRC). Established as part of the Normalization Annex of the Framework Agreement on the Bangsamoro (FAB), the Commission took on the difficult but important task of drafting recommendations based on its study of the Bangsamoro context, to promote healing and reconciliation among the different communities affected by the conflict in the Bangsamoro.

Many of the TJRC’s findings back in 2016 still hold true to this day, and it is high time for the Parliament to act on its commitment to safeguarding the Bangsamoro people’s right to truth, justice, reparations, and in guaranteeing non-recurrence. The TJRC also rightly points out that this period of transition, despite the challenges and constraints, offers many opportunities for us as peoples of the Bangsamoro to claim our rightful place in Philippine history and society, and for the Philippines to stand in solidarity with our calls for just and lasting peace.

The call for the enactment of transitional justice measures is anchored by principles of law and good governance. Art. IX, section 1 of the BOL provides that the “Bangsamoro Parliament shall enact a transitional justice mechanism to address the legitimate grievances of the Bangsamoro people and the indigenous peoples, such as historical injustices, human rights violations, and marginalization through unjust dispossession of territorial and proprietary rights and customary land tenure.” It clearly and unequivocally lays down the Parliament’s duty to craft such a mechanism, and even mentions examples of what wrongs must be addressed.

With due consideration to the recommendations of the TJRC, I now present four bills to the Bangsamoro Parliament as part of a legislative package that can help build a sustainable transitional justice and reconciliation framework relevant to the context of the Bangsamoro in transition.

As an initial step, the Bangsamoro Government must acknowledge violations of international human rights laws and international humanitarian law during decades of armed conflict in Mindanao, including those committed by state actors and state-affiliated armed groups. Setting up a systematic and permanent mechanism of documentation can aid the regional government in promoting healing and reconciliation in the region.

The Bangsamoro Government must also recognize victims and survivors to ensure that they or their families benefit from social protection measures and other monetary and non-monetary reparations included in the transitional justice packages to be administered by the Bangsamoro Government. This helps build a Bangsamoro historical memory and is integral to the truth-seeking process in the Bangsamoro, as government addresses both the root causes of conflict and their consequences, and prevents history from repeating itself.

The Bangsamoro struggle as we know it has long been driven by grassroots community efforts, and by the perseverance of the mujahideen and mujahidat who stood at the frontlines to defend our rights and freedoms. In line with the principles of Transitional Justice under the Bangsamoro Organic Law (BOL), and in aid of the reintegration of ex-combatants and their families, I submit the Bangsamoro Mujahideen/Mujahidat Benefits System Bill to the parliament for adoption and approval.

Mujahids have expressed their concerns and frustrations with regard to the ongoing decommissioning process, citing the absence of promised reintegration aid and support, which is crucial in ensuring transitional justice.

This bill supplements BTA Bill No. 25 or the Bangsamoro Veteran Mujahideen Act filed by MP Aida Silongan, which I supported and co-authored. It standardizes government support through a benefits system funded by the government, alongside private funding and investments. It covers all ex-combatants aged sixty (60) years old and above, or in case of their martyrdom, their surviving family members. Those who have been found guilty of gross human rights violations, as certified by the BHRC or the Commission on Human Rights, and beneficiaries of similar existing packages from the government may also be excluded.

The benefits provided for by the bill include an educational plan, burial assistance, hospitalization benefits, a monthly old age pension or a death pension, and a disability benefit. These shall be assessed and delivered on a needs-based system, and managed by the BTA Bill No. 25-proposed Bangsamoro Veteran Mujahideen/Mujahidat Affairs Office.

Alongside this benefits system bill is a Bangsamoro Health Care Subsidy Program outlined in a separate bill within the same legislative package. It consists of a health care program that provides subsidized medical services through the Bangsamoro Care Card. Initial beneficiaries shall be former combatants, their dependents or survivors, victims of human rights violations, and individuals displaced in the BARMM due to armed conflict and/or clan feud.

Both the benefits system bill and the Bangsamoro Health Care Subsidy Program bill will help the regional government address generational issues like poverty and hunger, which are rooted in the region’s history of violence and conflict. Health and education subsidies can provide better opportunities for livelihood and social mobility, easing some weight from the shoulders of those who have sustained the Bangsamoro struggle, prior to significant gains won during the peace negotiations.

Rounding out the transitional justice legislative package is the Regional Transitional Justice and Reconciliation Commission for the Bangsamoro Bill which seeks to institutionalize a Regional Transitional Justice and Reconciliation Commission for the Bangsamoro. This ensures that TJR initiatives and efforts are sustained not only by sheer will of the regional government and the people we represent, but by regular appropriations that will fund the operations of the commission. All matters pertaining to transitional justice will be coursed through the Regional TJRC, with sub-commissions dedicated to truth-seeking through documentation, investigation, and resolution; promoting accountability and rule of law; resolving issues related to land dispossession; and developing a meaningful process for reconciliation.

To pass laws that prioritize the rights and welfare of the communities whose struggle and sacrifice have made a better life possible for us is to offer consolation for the grief and loss they have suffered, and to honor and recognize the gains and dividends that came with their strong commitment to asserting our right to self-determination. I pray that the parliament will see and acknowledge the urgency of passing these bills, in the hopes of strengthening the justice system in the Bangsamoro. Any delay would be a disservice to the people who have fought all their lives to make our own pursuit of life and liberty possible. 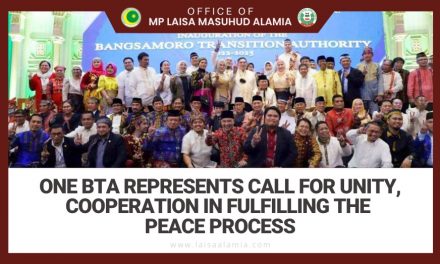 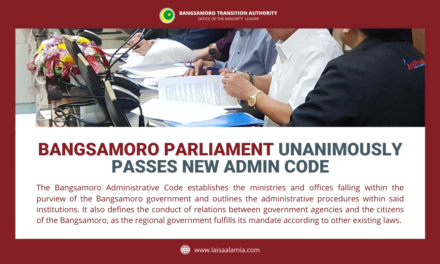 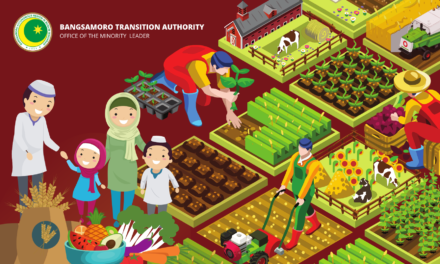 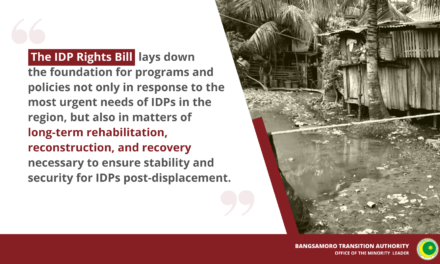